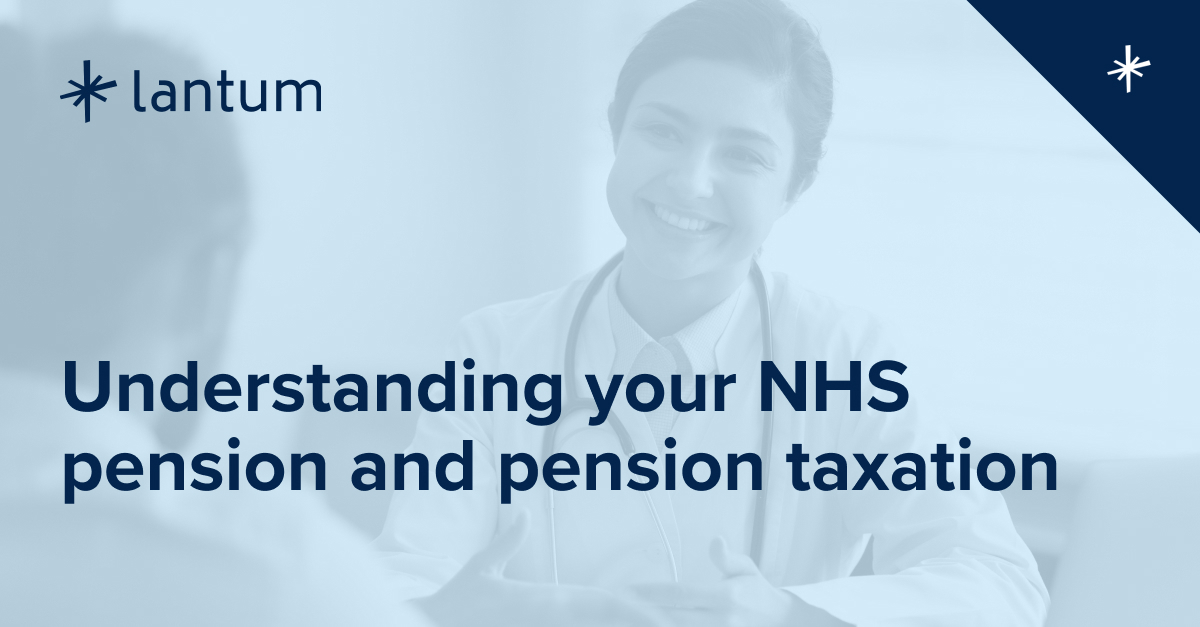 With recent changes to the NHS pension and pension taxation, there’s a lot of confusion around the best way to manage pensions.

Our webinar with Circle Medical Services on 30th November covered several essential topics for pension planning, including the benefits included in your NHS pension and pension taxation.

Keep reading to find out the best way to manage your pension so you can retire securely.

History of the NHS pension

Under the 1995 pension, the normal pension age (NPA) is 60. Members of this section of the scheme are entitled to an annual pension and a built-in tax-free lump sum.

For practitioners, earnings are based on fluctuating practice profits, while the pension is based on lifetime earnings, adjusted for inflation. For Officers, it’s a more traditional Final Salary scheme based on time in the scheme and the best salary in the final three years.

The 2008 section raised the NPA from 60 to 65 and gave officer members more flexibility in the pay used to calculate their pension. There is no automatic lump sum, but you can get one by giving up some of your pension.

This section allowed NHS workers who retired but came back to work to join the pension scheme again, or draw pension without actually having to retire.

In order to modernise and address the fact people were living longer, the 2015 section set the normal pension age to the same as your state pension age, currently between 66 and 68.

McCloud took the government to court on grounds of age discrimination and won, meaning that the entire public sector pension scheme had to change.

In time, people will have a choice whether or not to be in the old scheme between April 2015 and March 2022. Starting April 2022, everyone is under the 2015 scheme. The choice to remain under the 1995 or 2015 scheme for the seven year gap can be deferred until you retire and made based on what will be better for your individual needs.

There are several safe ways of topping up your pension, including:

The core aim of the NHS pension is to provide you with an income in retirement. It’s paid monthly straight into a bank account, or you can receive a tax-free lump sum.

Benefits for your family

If you pass away before retirement, your family receives a lump sum of two times your salary and part of the pension you’ve accrued to that point.

If you pass away after retirement, part of your pension is paid each month to your spouse as an adult survivor pension.

If you can’t work due to long-term illness, you qualify for sick pay depending on your length of service. If you still can’t work after a period of time, you can apply for a disability pension. There are three tiers:

Look at your total rewards statement through your employer portal or the external NHS website at www.totalrewardstatements.nhs.uk to see your yearly pension, adult dependent pension, lump sum and hypothetical annuity cost.

When drawing from your pension you can choose to give up some of the pension for the lump sum. You don’t have to take the maximum or the minimum — you can go somewhere in between depending on what works best for you.

NHS pension taxation is particularly complicated in part by the McCloud judgement, which will eventually change the way pensions are taxed.

“With the NHS pension, nothing is ever simple and it isn’t particularly easy to calculate,” said Kirstin D’Cruze, one of the financial advisors at Circle Medical Services.

To calculate the deemed growth within the scheme against the regular, non-NHS contribution allowance of £40,000, take your pension at the start of the year and increase it by inflation. Take your end-of-the-year balance without inflation, and the difference between the two numbers is your yearly growth.

If the number is over £40,000, you potentially have a tax charge. You can go back three years and use up the unused allowance, but after the amount you’re over is added to your income for the year and taxed accordingly.

If you find that you do have a tax charge, you have options for paying for it:

Any excess funds are liable for a tax charge when drawn, and taxed at either 25% or 55% depending on the method of drawing the benefits.

If you plan on working until you’re 65, you might have multiple charges. Retiring early makes your pension lower, which brings you under the lifetime allowance.

There are still things changing with the NHS pension. Contribution rates changed in October 2022, meaning that GPs have different rates from April to September 2022 and October 2022 to March 2023.

Contributions rate changes are scheduled for April or October in 2023 and will be tied to pay rises so you don’t jump into a higher bank.

If you have any questions about planning your pensions as a GP, email enquiries@circlefinancial.co.uk

Locum life is busy enough. Stay on top of your finances and workload as a GP when you use Lantum to find flexible work near you, and get access to more benefits like:

Create your free account today and start finding work near you: