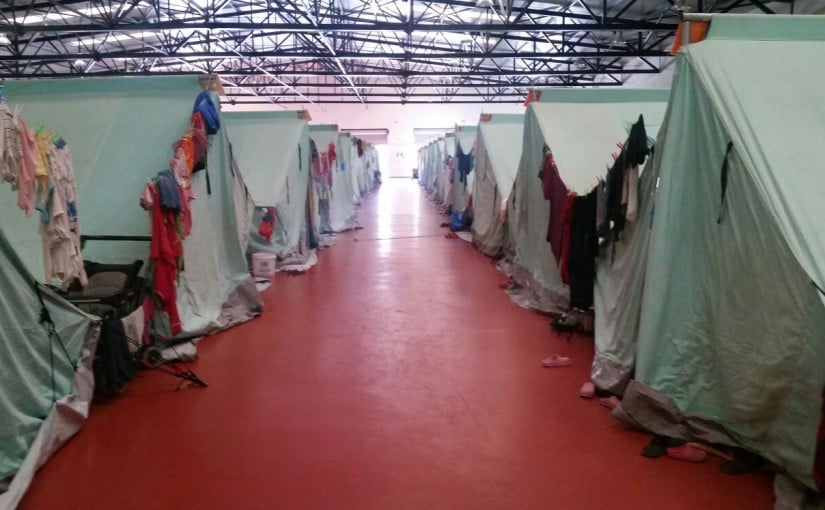 From Kensington to Thessaloniki: A week as a refugee doctor in Greece

Like so many of you, I have watched the News over the past few months and

been appalled by the atrocities going on around the world.

In the last five years of civil war in Syria, over two hundred and fifty thousand

people have lost their lives, and nearly five million have had to flee – most of

them are women and children.

We have seen and heard of horrifying footage of mass killings, chemical warfare

against civilians, indiscriminate bombing, sexual violence and beheadings. And

the harrowing images of refugees drowning in the Mediterranean, in a desperate

attempt to reach safer shores, are difficult to forget.

I decided to use my skills as a doctor to help.

commitment times required by some of the more well-known NGOs. However

to donate, typically one or two weeks.

enrolment process is quick and simple; I received response from both

organisations within 24 hours of expressing my interest and attaching basic

documents (C.V., degree certificate, CRB check etc) via email. I was sent a

comprehensive guide on what to do and what to expect.

As a volunteer you pay for your own costs – flights to Thessoloniki, Greece, are

relatively cheap, accommodation in a 4 star hotel is heavily discounted for

volunteers, and food is also reasonably priced. You will find the Greeks treat you

with kindness and generosity, demonstrating their gratitude for your work.

Frakapoor, Karamanlis and Iliadis, each with a population of approximately five

hundred inhabitants. The refugees live in makeshift homes, in the form of small

tents. Each tent houses at least one family so, as you can imagine, the living

conditions are incredibly cramped. Despite this, it was humbling to see how

some made it their home, displaying knitted rugs inside and tiny potted plants at

There is one clinic at each of the camps. Each ideally has two doctors, one

vary depending on how many volunteer that week.

The working day starts at 9am with a morning meeting, and surgery finishes at

7pm. Clinically the work is the ‘bread-and- butter’ of UK general practice, and you

won’t feel out of your depth in terms of knowledge or experience. We, arguably,

have the perfect skill-set for this job.

Despite this relative advantage, the work is undeniably physically and

emotionally draining. I saw up to fifty patients per day. Each with their own

endemic, and the hardships ongoing.

An additional challenge is that the Syrian healthcare system is very different.

General Practice does not exist in Syria, and managing patient expectations was

tough, especially with the already overstretched Greek system. Many feared they

were receiving a sub-standard quality of care because they are refugees, and

there were some who believed us to be ‘experimenting’ on them. These patients

have first-hand experience of the fragility of life, and are understandably hyper-

vigilant when it comes to their health.

Seeing malnourished children and a population in dire straits, I realised that

medical aid is only a part of what these refugees need. I chose to also participate

in humanitarian work – which included labouring behind the scenes in the

warehouse, distributing food, and teaching in the makeshift camp schools. This

was an optional add-on to my primary role as doctor.

There are many benefits of getting involved with a project like this. Besides

helping those in need, this short trip enriched my experience and abilities as a

clinician. On numerous occasions I had to ‘think outside the box’ and find

innovative ways to implement management plans despite limited resources. My

capacity to mutli-task was also tested, as my role included calculating doses,

by my medical indemnity, free of charge.

I worked in a fantastic multi-disciplinary team of international colleagues; the

sense of camaraderie in this environment is unparalleled. I have, undoubtedly,

made some lifelong friends.

In short, I would highly recommend participating in such a project – it will be a

week well spent. As one child-refugee succinctly puts it, ‘We need you.’