Blame it on the Boogie. An introduction to The Dancing Plague of 1518 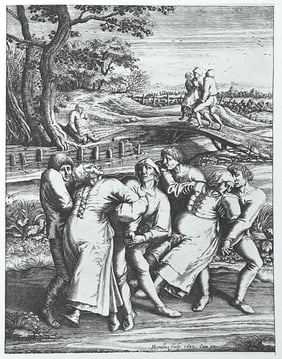 Have you heard of the dancing plague? A curious mania that began in 1518 in Strasbourg, when Frau Troffea took to the streets and began to dance furiously. After several days of dancing, the fever had spread to roughly 34 people, resembling an early attempt at a flash mob. The more static townsfolk sought the advice of local doctors;

‘Physicians ruled out astrological and supernatural causes, and instead announced that the plague was a 'natural disease' caused by 'hot blood.'

However, instead of prescribing bleeding, authorities encouraged more dancing, in part by opening two guildhalls and a grain market, and even constructing a wooden stage. The authorities did this because they believed that the dancers would only recover if they danced continuously night and day. To increase the effectiveness of the cure, authorities even paid for musicians to keep the afflicted moving."(1)

So they built a festival around the dancers, which might explain how two months later, the afflicted numbered 400 people. At which point, those who had not died from exertion were ferried out to a healing shrine in a last attempt to save them from the boogie. 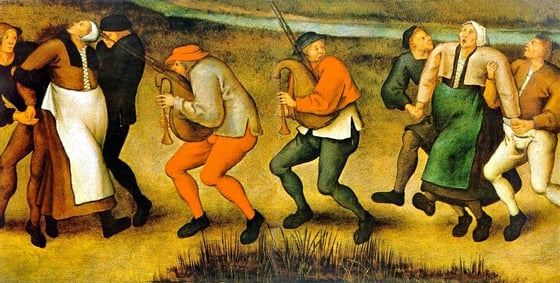 Strasburg’s dancing plague was not, shockingly, the only outbreak of compulsive dancing in large groups of people, it was actually quite the thing in Europe. But this case is the most documented and the most puzzled over.

So, what possible cause can we find for the mass disco that led some to an exhausted death?

Many theories have been put forward, suggesting everything from psychotropic trips caused by eating mold, the devil, or possible cult activity.

Likely though, the real reason was that of mass hysteria,  caused by the sense of poverty, despair and diseases like smallpox and leprosy that were upon Strasbourg at the time. It is recorded that the dancers weren't exactly happy about their plight, expressing pleas for help and telling of their misery as they carried on.

John Waller, author of 'A Time to Dance: A Time To Die' holds the opinion that the dancers were trapped in a trance state.

"We know that the trance state is more likely to occur in people who under extreme psychological distress, and who believe in the possibility of spirit possession. All of these conditions were satisfied in Strasbourg in 1518.

The city's poor were suffering from severe famine and disease. And, crucially, we also know they believed in a saint called St. Vitus who had the power to take over their minds and inflict a terrible, compulsive dance.

Once these highly vulnerable people began to anticipate the St. Vitus curse they increased the likelihood that they'd enter the trance state. And once in it, they acted out the part of the accursed: dancing wildly for days at a time. So the epidemic, I argue, was a result of both desperation and pious fear."(2)

After the reformation, the Protestant faith didn't hold onto St Vitus, so dancing plagues became rarer, with the last documented case happening in 1840.

Whether this or any other cases of mass hysteria were caused by LSD occurring in mold or religious fever, mass hysteria tells us a lot about the human mind and it's endless capabilities.

“The Dancing Plague tells us much about the extraordinary supernaturalism of late medieval people, but it also reveals the extremes to which fear and irrationality can lead us."

He adds, "Few events in my view so clearly show the extraordinary potentials of the human mind." (3)

Network Locum (now Lantum) is an online service connecting GPs with Practices fairly, simply and at half the cost of traditional agencies. To see jobs in your area, please click here.